It is never only about putting a signal at the good level of luminance and chrominance.

It is never only about getting the same level on images from different cameras.

It is never only about adjusting shots one by one so that they technically or visually “match”, searching an ideal coherence.

It also involves reworking the cinematic matter, its details, its grains, its shininess, taking into account its potential, but also its limits.

It is also often to guide the eyes of the spectators or to let them wander around in a decor.

It is also sometimes, one last time, looking for the most appropriate aesthetic for a film, a scene, a character.

It is also always taking care, one last time, of a person’s or a character’s good looking, of his appearance and skin color.

It is above all to help the narration, to accompany the music and the sound of a film, to put a final layer of painting on images sometimes already very strong, sometimes still so fragile…

Color grading is all that at once, and a thousand things more !

Forty years ago, the Voyager probes were sent to space with The Sounds of the Earth, a golden disc containing welcome messages in 55 languages for aliens. While he still drifts tirelessly into space today, Noël spend Christmas Eve in his family of Italian immigrants, where reflections of ordinary racism flow more than ever around the table…

Jaime is the portrait of a young man affected by a mental disorder in which his mind perceives reality in a distorted way. In this fascinating and provoking medium length film, director Francisco Javier Rodriguez questions our idea of reality, creating a subtle game in which fact and fiction merge. Touching yet unsettling, this film interrogates what we consider to be “the norm”.

A VILLAGE IN TURMOIL

The night. In a small village in southern Belgium, a disturbing white tower appears. From their rooms, 5 children tell us about their fears. Meanwhile, the spectre of the dreaded end of the world is approaching. The next morning the awakening is brutal. Alone in the world and united by the force of events, they decide to undertake a quest towards this mysterious white tower.

During a normal school day, Dieter, an insecure teenager, watches online self-help videos that become increasingly far-right and slowly influence the way he sees the world.

A motorbike goes through desert landscapes, mountains, and bush. On board, Moussa, a young turbaned Tuareg braves the dust for hundreds of kilometres. Hidden in his vehicle, about 50 tablets of Tramadol, one of the most popular narcotics in WestAfrica…

In the heart of the Pyrenees, hikers take the marked trails, cross the Ossoue glacier and reach the summit of the Vignemale before descending to the plain.

Among them, two characters stay at altitude and try to live in the mountain.

Fujihiko Matsushime is a 36-year-old man living alone in a traditional Japanese house. His daily life is perfectly ordered and timed. But one day, his routine is disturbed by strange elements taking place in this old, creaking house. Troubled, Fujihiko tries to find out what may be happening in his home.

Olivier is a hypochondriac pharmacist who regularly consults his fellow doctors. Unable to answer the recurring question about his own family medical history, he decides to investigate his biological roots. Obsessed with his research and worried about the answers he finally finds out, he forgets what matters most…

For several months, this film will follow the footsteps a 27-year-old “returnee”, from Syria. After serving a heavy prison sentence for wanting to join ISIS, she must now retrieve the course of her life. However, the obstacles are numerous. The judicial system has not created the proper conditions for a seamless transition to home.
She has changed she acknowledges her mistakes. Yet, the judicial system does not believe in her redemption. It freezes her in the simplistic image of a radical Islamic woman. She is no longer that woman, but by not granting her a second chance, the system is taking the risk of over-radicalizing. Here in Belgium and not in the Syrian hell, these returnees are abandoned to themselves. Without the support of her family, the young woman would not be able to escape such spiral.

A prisoner of his own, the figures-lined walls, Jonas counts, repeats himself, constantly relives the torments of his childhood, an actor precocious of daily violence, he confronts himself with all his sufferings, a reality that he can not escape.

THIS IS NOT A SUITCASE
(CECI N'EST PAS UNE VALISE)

Guy, 55 year-old taxi driver, is about to travel with the Eurostar, for the first time of his life : his daughter is getting married. But when he parks to take the train, he discovers concealed in his suitcase, a 7 year-old girl who’s from Kinshasa. This is Maïssa. Her demand is clear and non-negotiable : Guy must take her with him to London, in his suitcase.

THE DRAGON WITH TWO HEADS
(LE DRAGON A DEUX TETES)

To escape the homophobic reality of their homeland, two Brazilian twin brothers are now living in Europe. The first brother has a perfectly legal status in Brussels, the second is an illegal immigrant and lives like a ghost in the German capital. Set during the 2018 Brazilian elections, the brothers’ anguish about the future of their country under the rise of far-right candidate Jair Bolsonaro deepens when one of the twins is involved in an accident.

Bob is sent to a remote area to repair a radio transmission antenna. Once on site, he is surprised to discover that it is connected to a building site by a mysterious cable…

Night Trip is the last inner trip of a heroin addict overdosing, powerless before the leaving of the one he has has abandoned… this child full of hope that lives within us until our last breath.

This documentary tells the story of a woman and two men who took the risk of dying rather than killing. During the Rwandan genocide of 1994, when the vast majority of the Hutu participated in the killings, they hid and saved Tutsis, at the risk of their lives. Each in its own way and in different places.

Jasmina Orban, the psychiatrist calls back Yoann Peeters to help her
prove the innocence of one of her patients, Dany Bastin. Dany, a former
convict, was working as a gardener for wealthy owner Astrid du Tilleul,
who was found murdered in the swimming pool of her house.

This documentary is a dialogue between young women about the feminine sexuality. With a communicative freedom, courage and humor, they share their experiences and their stories, in the hope to change the world around them and to give to the women the right in an informed sex education, delivered from the constraints and the taboos.

Two losers are trying to catch an elusive lion for an improbable prize. Or perhaps they are exorcizing the phantoms of colonialism that haunt the town…

During her first sexual experience, a teenager discovers she has an unsettling peculiarity. A modern-day tale of sexual development and self-acceptance.

In Łódź, an old man, Zenek, lives alone and observes his neighborhood through the window of his small apartment. Outside, people are gathering as the wind picks up. 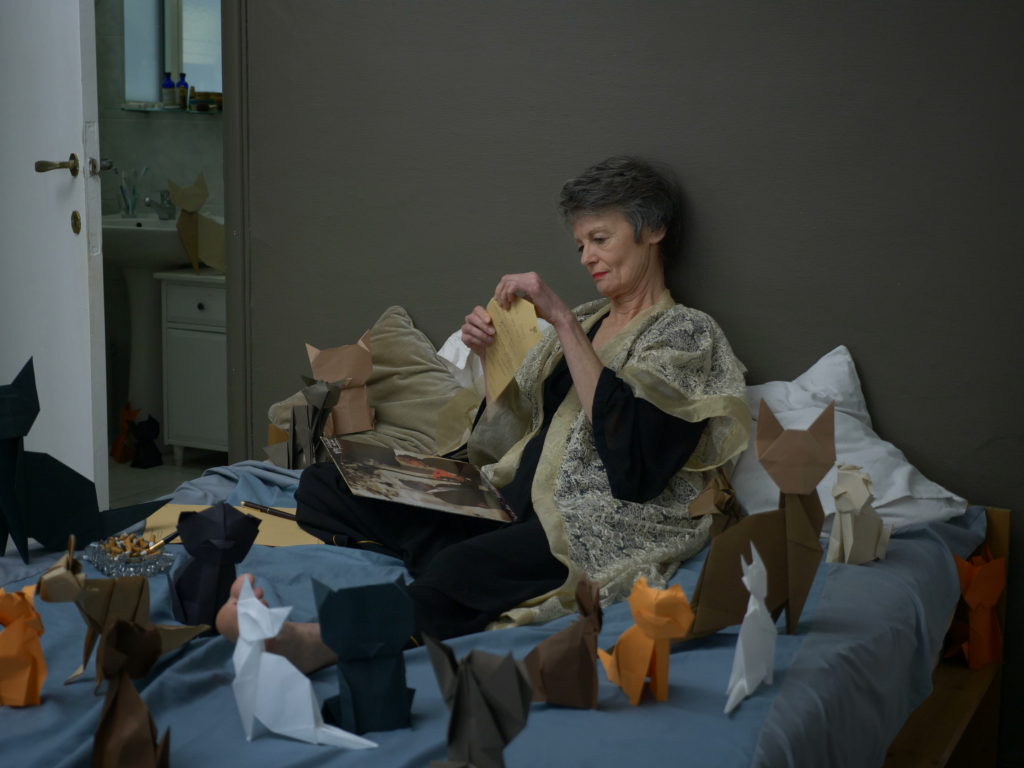 This video was made to be integrated in the theater play Les papillons de nuit rêvent aussi  (written and staged by Jean-Louis Cousseau, 2018). This play is about Pannonica de Koenigswarter, scion of the Rothschild family and famous jazz patron in the United States during the 50-60’s.

The theater play : An actress and 3 musicians launch into a suite of variations inspired by Pannonica de Koenigswarter’s life. On the background of projections photo and video, the four artists create various forms of exchanges between words and musics; between past and present, also. Because beyond the testimony on the one that we called « the Baroness of the jazz », this musical play is about the world of today, about the fragile place of the artistic creation in the contemporary society, about the necessity of being oneself.

Salomon, a traveller, comes back to his hometown. Sitting at the bar of his old friend Jean, he remembers Dimitri, his travelling companion, who died in a strange shooting.

Tonight it’s movie night at home. After the film ends, Lucie and Manu spark up a conversation about the idea of travelling. Over cigarettes and glasses of wine, they share their desires, needs and expectations.

At the market of Yerevan, in Armenia, a merchant invites us to share his fruits and his history…

THE GIRL AND THE DOG

The dreamlike journey of a girl from Ukraine, which meets giants, passionate people, dog and girl and her grandmother in La Louvière (Belgium).

This documentary is about the project « Tactil’Animation », which aims to realize a medium of tactile expression, through the creation of a tactile animation movie. This tactile animation movie could allow a blind or a visual-impaired person to feel a history based mainly on the sense of touch, with a sound support.

A desert place at night. Sitting on a swing, a dreamer tells a story to his voice recorder… He saves Julia, a young woman waiting for her first love, Yvan. The dreamer offers Julia to find him… Julia is adapted from Fiodor Dostoïevski’s White Nights.